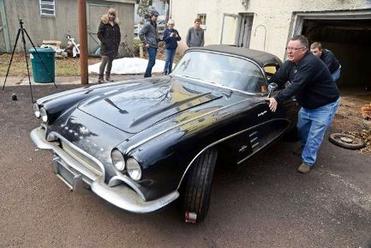 Mike Walsh has been involved in the Corvette hobby since he was a youngster. His father Don, one of the founders of the Brooklyn Hot Rod Association , had a passion for the Solid axle models. In the 70’s  father &  son hit the show circuit with Don’s semi-custom 59 Corvette. There were also trips to Westhamton dragstrip running his uncle Willie’s Honduras maroon 62. By the late 70’s Mike was heavily infected with the “Corvette bug’ and started to look for a solid axle Vette in the price range that a 16 year old could afford.

Together the brothers look to continue to build stunning award winning cars and making their customers dreams and fantasies come true.

After years of working for other restoration and hotrod shops, Mike decided to open his own shop in 2002, specializing in the first  three generations of Corvettes and GM Muscle cars. Over the years, The Early Vette Shop Inc. has built many award winning cars and has been featured in numerous magazines. Recently Mike’s brother Joe was brought in to expand the team.

In 1979 Mike bought his first Corvette, a 62 basket case for $1500. Over the course of the next 2 years he put the car together using leftover parts from friends restorations. Over the past 35 years of owning that same car, it has accumulated in excess of 100,000 miles of driving and racing.